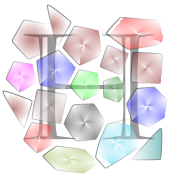 Hi everyone! I have a long-running and ongoing software and research project dealing with audio mosaics. I hope this eventually leads to user-focused software that aids sampling within music and audio production.

Here are some selected examples that seemed surprising and musically coherent enough to share, all using the same template signal, and using six different albums as source material.

tldr nerd, take me to the mosaics

The process is a randomized one, akin to a random projection of an album onto a template or guide signal. It tiles the template (irregularly) with adapted pieces of the sources, insofar as they roughly match the guide, adapted (mostly harmonically) to the context.

We use the following definitions:

For the target sound, we use:

The original excerpt is embedded below on freesound.org:

Sections per album/artist, and closing:

Our first source album is the mellow “Solo Rhodes” (a tribute to Thelonius Monk) from keyboardist Woody Goss.

Not too much to say, although I like how the fast bebop runs are incorporated along with the sleepy chords.

Here the algorithm has picked a lot of sustained bass tones that match the target melody, so not a lot going on. But then at the end, it explodes into action along with a comic stinger.

Update: As I felt the original mosaic was a bit of the weakest link, I made another mosaic, this time, a composite of two new takes, to replace it. This one has a bit more constant action, as I was looking to avoid the sustained single tones.

Continuing with the water theme, “Water Music” from the tropically inspired chanteuse and bossanovist Adron.

Despite the relative chaos here, I think the chords mostly flow well to the flat 2 chord conclusion.

Next, we have the dreamy “Welcome to the Star Theater” from Primitive Spaceship.

Bubbly, skyward textures amid sunny chords. Ain’t nothing wrong with this mosaic–it illuminates and recontextualizes its target.

This is one of my favorite examples, because:

Perhaps due to its clean textures and simple yet dynamic harmonies, this album often produces good results (to my ears).

Finally, I dug deep into my old classical (late Romantic era) favorite CDs:
a recording of Glazunov’s evergreen quartet staple Five Novelettes, including the Quartet No. 5 as well, from the St. Petersburg String Quartet.

album link from Delos, link to the first movement on Youtube.

Here, I have manually adjusted the pitch of some of the segments (all by less than a semitone) to bring the keys of the segments and target in line. It is the only example on this page that I adjusted in this way, but I thought it improved the tonality.

Perhaps because the timbres blend well together, we arrive at something of an apex–approaching counterpoint and composition from a humble mosaic. If this is all we can accomplish with such tools, we should be well aided.

And the landing sticks well.

Special thanks to Nate, who provided suggestions, inputs, and feedback regarding the mosaics.